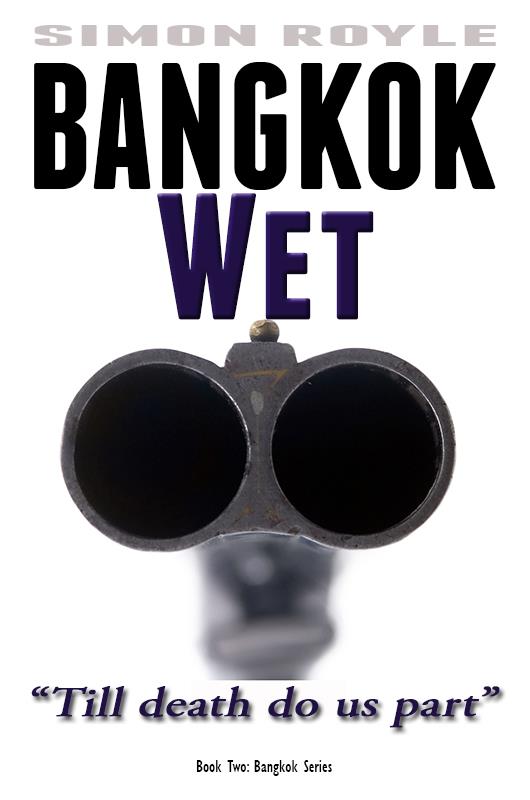 Editing is in progress, however, barring any howlers from me (which is always a possibility) the story has been written and will not change. The word count as it stands is 79,106 words.

I started writing, Bangkok Wet, right after I finished Bangkok Burn; the actual date was the 31 December 2011 – yes, New Year’s Eve – the exciting life of a writer. As with any of my writing I had no idea where the story would go. I had an event, a situation, and a setting but that was it.

In a sequel, you have to balance how much ‘back-story’ you’re going to include. I chose not to include that much. The books can be read separately, individually, although it would be better to read them in sequence, as Bangkok Wet, naturally, alludes to events in Bangkok Burn and thus contains ‘spoilers’. A fact I will mention in the blurb.

I haven’t gotten around to writing the blurb yet – a task I don’t like doing, but one which is important to get right.

It took a while to get these characters talking, but once they started, they wouldn’t shut up. Their mannerisms, their voices become distinct and fly onto the page; typos galore at that point because you’re trying to get it down as fast as they are talking. And then one of them says something you hadn’t expected; and it takes you in a completely different direction. This is the joy of writing without plot, outline or an ending in your head.

There were also bad times. When it’s just you and Microsoft Word, previous chapters written, some thirty-three thousand words, and you’re thinking to yourself, it’s all crap – a blank page in front of you, and a silent cast standing-by waiting for direction. When the muse decides it’s his day off and you’re on your own – those are the days that make a writer out of you, and are not joyful. They’re painful, filled with doubt, insecurity, fear, and occasionally, loathing.

When that happens, if you’re a new writer reading this, all I can advise – is to keep going. You may be right, it may be crap, but you won’t know if you don’t finish it. The most important thing, you’ll be stronger when you do finish it.

One of the pleasures of writing without an outline or a plan is that as you hastily scribble down (can you scribble on a keyboard?), all those characters talking and their thoughts, you have very little time to think about any of it as part of your story, like a medium who’s gone into a trance your fingers transcribe, but the content of what you’re transcribing remains unremembered. One by one the characters tell their stories, until they fall silent and the story is told.

Then you get to indulge in a  true pleasure – you get to read it for the first time. You’ll pick up a hundred typos even though you’ve been editing as you go, you’ll spot a few inconsistencies and maybe even a plot hole or two – but you may also come across something that makes you think, that maybe you’re getting the hang of this writing thing, and those moments are worth all the pain.

I hope you enjoy reading Bangkok Wet as much as I enjoyed writing it. Barring any unforeseen codswallop, it’ll be published within days.