One of the questions I get asked a lot about Tag, is how did I make the world that the story is set in? The answer is that I didn’t make it up. It exists around us today. The technology is either already available or a close extrapolation based on what we have. Also the politics and nature of business described is all “lifted” from what I experience – of course with embellishments, or twists (sometimes to make the truth less strange :)).

Inspiration for writing comes from what we experience and feel. In some cases we’re just writing to ourselves, perhaps to absorb “it” better but for others we’re trying to share experience through description.

So it would be remiss of me, not to talk a little about the floods we are experiencing right now in Thailand. This next pic is me driving home. This is taken right outside the infamous, “Bangkok Hilton”, or Bangkok’s main remand prison. Infamous inmates have recently included, Victor Bout, prior to him being shipped off stateside. 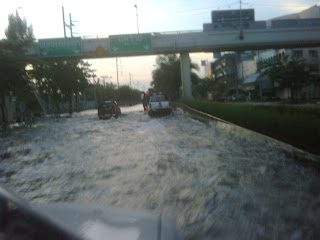 It’s a bit blurry as it was snapped from my BB while I was driving. That’s how it goes. From a writer’s point of view, national disasters are much food for thought. How people react. Emotion, fatalism, sharing, thievery (yes, thieves on boats). How politicians have reacted; photo ops and meaningless politicking. Who’s really helping. All of those things are fuel for for a writer. Fiction or not.

A funny thing…
I took the main elevated highway headed north out of Bangkok and dropped down on the Nam Wong Wan Exit. I knew the area below was flooded – I didn’t know how high, but it had been reported at between 80-50cm. My car would be OK with 50. Not so good with 80, but I figured I’d probably make it. I descended from the highway, cars parked on the hard shoulder and the outside lane. People have taken to parking their cars on any high ground available – normally, unless you’ve broken down you’re not allowed to park on the expressways, but this isn’t “normally”. The parking stretches for many kilometers on many of Bangkok’s expressways.

As I was saying, I drove my car down the exit ramp, to be greeted by a car driven by a young woman. Naturally I stopped. Fortunately, she stopped too. And then she looked at me, as if to say, “Hey I’ve got my hazard lights on, so I have right of way…” It was tricky to back up as I was concerned about another car coming down from the expressway. She looked at me. I shrugged my shoulders. Finally, I think it dawned on her that she was driving the wrong way on the expressway and she reversed back so I could exit.

And then I drove down into the water as pictured above. That’s taken at one of the lower levels of water on the road. Further up it gets as deep as a meter.

Another, funny thing…
I got overtaken, on the inside lane, by a boat. Yes, we were both using the same stretch of road. I got a wave. From the driver and the boat. A little surreal.

Is the way that this flood has, and is, being , mangled handled by the government. The information has been inaccurate, misleading, alarming (one message last week – “Evacuate Bangkok Immediately”), and generally unhelpful. It seems to most people (I spend more time talking to Thai people than I do other foreigners) that the only thing the politicians are doing about the flood is using it for photo ops.

Meanwhile ordinary Thai people 99% have been helping each other. Sharing food, donating money and pitching in to fill sandbags or help protect each others homes.

The sheer volume of water that built up at the back end of the rainy season was simply too much – seems to be the excuse. But guys (and gals) it took a long time to build up, and people have been dying (533 to date) for over three months.

Early September, flooding had already hit many provinces in the North. The Dams were full, water being released as fast as it was collected. The water in Thailand, for quite a few years now, has taken its usual path to the sea, downwards. This is a fairly common phenomenon, but one that appears to have been ignored.

To be sure, it has been a big challenge and bad luck for a new government to come into office just as Thailand gets hit with these floods. But the team put together to handle the flood and all aspects of the flood, news, relief etc. have not performed well (it would take a brave woman to deny otherwise). In a way this flood could have been the making of a great leader, someone who truly set aside any notion of politics and simply got on with the job of making Thai people’s lives better. Unfortunately that hasn’t been the case. However we live in hope. Both for a drier and less partisan future. One that reconciles and benefits all.

This NYT article about the flood is reasonably balanced, despite the overly dramatic headline.

On a personal level, I was in hotels for a couple of weeks, while family was upcountry in a safe and dry place. We’re all back together now at home, virtually surrounded by water, but we’re told, sort of, that the worst is over and Bangkok will be dry in about ten days. That road pictured above is about four kiloms from where I live and still very wet. Many of the staff of my company in Thailand are in hotels or hostels around the city. We, of course, are helping with that expense but it is small help compared to the inconvenience and hardship being faced. Many have their homes flooded.

What doesn’t kill you, makes you stronger (and gives you lots of material to write about).