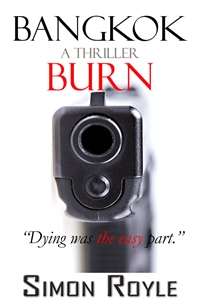 Product Description
Take a walk on the darkside.
Orphaned as a child and raised as the only son of a Thai mafia Godfather. Chance, plans to quit the family business for the woman he loves.
Chance’s father, Por, is The Godfather of Pak Nam, and owner of the largest crocodile farm on earth. He didn’t get to where he is, without knowing a thing or two about people and how long it takes for a crocodile to digest one. Before Chance can quit, his father asks him to, “take care of a little something for me.” Then a bomb goes off.
Waking up in hospital later that night, his father in a coma next door, Chance’s troubles have only just begun. There’re three guys dressed in black down the corridor, and they’re not carrying flowers. Worse, Uncle Mike isn’t answering his phone, and a guy with a lisp is asking for a hundred million dollars in a week or “I’ll kill him, sthlowly.”
While figuring out who is trying to put the family permanently out of business, where to get a hundred million, and who’s got Uncle Mike, in a Bangkok gone crazy, quitting the family business takes a backseat to survival.
Survival begins with dying. And dying was the easy part.
***
So what do you think?
Planning to release the novel in early February depending on wind direction.